Following on from ‘1948 Israel Invaded‘ 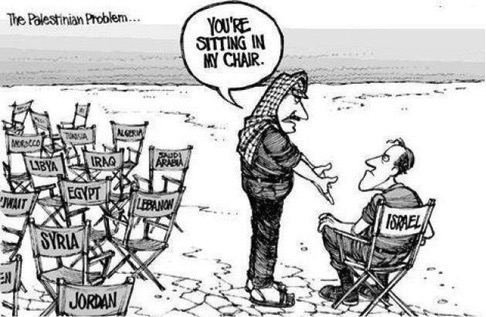 Israel’s reality of the last 19 years was about to change all within six days.

‘Israel on the eve of the 1967 Six-Day War was a country of more than 2.5 million people, of whom approximately 87 percent were Jews. Its 7,200 square miles … comprised one-tenth of one percent of the Middle East landmass, and less than two percent of the region’s total population’. sixdaywar.org (an indepth site on the 6 day war)

Did Israel Start the Six Day War? (gives a brief summary of events for those with limited time)

We have to remember the 1967 war (as well as the 1948) was to be a war of annihilation. No Jew would be living in the land after Arab victory and the intended massacre was fully broadcast. No physical aid was given to Israel during it, France even denying them their already fully-paid-for fighter planes and Britain and the USA sitting on the sidelines -unwilling to help. The world looked on as  Egypt, Syria and Jordan, with Iraq and Lebanon -(along with the support of Algeria, Kuwait, Libya, Morocco, Pakistan, the PLO, Saudi Arabia, Sudan and Tunisia) prepared to invade Israel. This was today’s version of David and Goliath replayed. David did a pre-emptive strike on the posturing Goliath with lightning success, as did Israel in 1967 all within six days, securing all of the previously fractured Israel plus more as can be seen in the first map below. Israel’s actions of returning land to her hostile neighbours in the ensuing years to engender peaceful relations between them has been jaw-droppingly-incredible. The Arab intent has not really changed. Though official treaties and truces between individual countries and Israel are signed, the hatred of the Jewish presence amidst them continues to fuel the fire of discontent. Israel’s stance remains one ready for war for her own survival.

We all know peace has still not arrived in the middle-east concerning Israel. Conflict, Arab intifada’s (‘uprisings’)- Muslim terrorism culminating in military counter measures by Israel for the safety of her citizens, with blockades and checkpoints in order to minimise Muslim violence suffered by her. So much is expected of Israel compared to her neighbours. No other country deals with the hypercritical opinions and pressures applied on her by world forums supposedly for peace. Israel not only faces physical harm by the nations surrounding her, but also must combat global disinformation – the media war. One should expect truth from our news journalists, but who tells the truth now? Lying is so ingrained in our communications with each other, it becomes a sought-after-skill to enhance ourselves and manipulate others for our own advantage. When uncovered as false it becomes our public shame, but undetected, it is our pride. However, truth remains, and if obscured now will not remain so indefinitely. 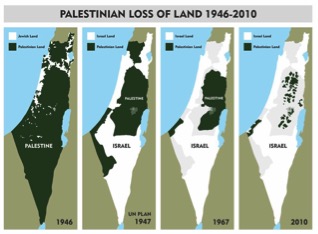 Here is an example of disinformation concerning the land of Israel. The 1st of 4 maps probably show individual land ownership legally bought in full by Jews from Arab landholders. Though all the area was designated as a Jewish homeland it was not a takeover situation as is the popular portrayal. And the green area does not represent Arab only as Jews also were called ‘Palestinians’ and  lived in this area also . The 2nd map once discarded outright by the Arabs has now become a pivotal tool of indignation as to ‘what was theirs’ and used -to lay claim to offence for ‘Israeli Occupation’ as is emphasised in the remaining 2 maps. Every action has a consequence however, decisions made in the past definitely affecting lives today.

Making use of a map that was never legally binding (UN 1947) to accuse Israel of ‘unlawful’ occupation is misleading. All of ‘Palestine’ was given to the Jews (referred to as ‘Palestinians’) in 1922 by the international community as it was their historic homeland and largely uninhabited. Arab aggression and non-agreement to any concessions offered by Israel for peace, essentially made the 1947 UN ‘partition plan’ null and void –never moving past a recommendation. 1948 saw Israel become the new State of Israel and her Arab neighbours the next day went to war to invade and destroy her. Jordan invaded and occupied ‘West Bank’ and Egypt obtained the Gaza Strip for the next 19 years, with Israel holding the remaining territory. It is at this point the 1947 UN plan is used as leverage in the media war to delegitimise the State of Israel. Why didn’t the world denounce Jordan’s invasion as illegal? In 1967 the surrounding Arab nations again made war against Israel to their loss –Israel securing the Golan Heights from Syria and the Sinai Peninsula from Egypt. The Gaza Strip and the West Bank now also became Israeli territory. Israel however did not keep all it’s gained territory but over the ensuing years, returned most of the areas gained that could be exchanged for peace between her neighbours and herself. Jordan still has control of the temple mount in Jerusalem and though the West Bank has lost control over some of its original area (for Israeli defence purposes) there are within, areas of ‘Palestinian’ autonomy/authority. Unfortunately Arab Palestinians do not acknowledge any area of Israel as belonging to the Jewish people so there is no real premise for peace between them. It is to be remembered that until the mid 1800’s Israel stood desolate (one of the causes being the Ottoman tax on trees), mostly uninhabited because of malarial swamps (especially in the north) until the Jews with British support began developing the land and internal infrastructures. There were more Arabs than Jews living there at that time, but the population was always small with minimal growth (0.7% per year). Though they were a minority there has always been a Jewish presence in the land. As Palestine’s economy improved, many Arabs from outlying areas, even Iraq came seeking employment of the Jews. By 1948 there were around 1.2-1.3 million Arabs in Israel. Land was acquired legally by the Jews and compensation made where required to the original owners and even on occasion tenants. On 15 May 1948 the State of Israel consisted of 60% Jews and 40% Arabs as her citizens. Apartheid practice  in reality only occurs in the Arab world crying ‘foul!’ concerning Jews.

Some recent articles I’ve been reading:

Bassam Tawil -Middle East Scholar -a Palestinian’s voice –take your pick of the many articles he has written for an interesting read.

A couple of examples of media lies: